The Cross Partition ringis are developed based on the idea of increasing the specific surface of the filler to enhance the mass transfer efficiency. The Cross Partition ring is an improvement of the Raschig ring. The method of adding a partition in a similar ring expands the surface area, while increasing the compressive strength of the porcelain filler. It is usually used as the first layer to support small fillers in a monolithic type, with relatively low pressure drop, and less channeling and wall flow. And It is generally made of ceramics.

Generally speaking, due to its large size, this kind of packing is only suitable for neat stacking, and is generally only used as a support distribution layer at the bottom of the tower for random packing. Φ80-200mm cross diaphragm ring can be used as supporting material, the porosity is greater than 60%, and the number is the integral number. 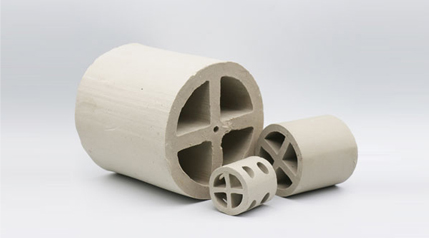 Ceramic Cross Partition Ring is a kind of random packing further improved on the basis of Raschig Ring, adding the cross clapboard inside the ring.

3A Molecular Sieve is the Most Suitable Desiccant for Insulating Glass

Do You Have Any Questions?