How Long is the Life Cycle of Activated Alumina Adsorbent?

How Long is the Life Cycle of Activated Alumina Adsorbent?

This product is made from pure natural minerals and activated hygroscopic agent. It is green, non-toxic, tasteless and does no harm to the human body. The product has a good adsorption performance, activated adsorption and the function of static dehumidification under the normal temperature and humidity. The range of the application of the activated alumina includes: widely used in the areas of hardware, electrical appliances, leather shoes, clothing and other industries. The activated alumina desiccant is safe, environment- friendly and naturally degradable.

1. The function of the activated alumina desiccant

With the using of the United States DuPont packaging technology, the activated alumina desiccant has strong moisture adsorption that can effectively prevent condensation in the container—moisture, mold, rust, oxidation and so on, from being generated by the change of ocean temperature and humidity. The waterlogging in cartons will influence the appearance or directly damage the outer packaging, even affect the quality of the product, such as the rusty metal parts or the falling labels. The principle of the moisture adsorption of the activated alumina desiccant is that the component of the desiccant used in the container is calcium. In the condition of 25 degrees Celsius and 90% of the humidity, the maximum capacity of the vapor adsorption can achieve 250% of its own weight, at the same level as other similar products abroad.

2. The using cycle of the activated alumina adsorbent

When does the activated alumina have a good adsorption effect? And when does not it work? It is related to its hydrogen ion concentration (PH). Under acidic or alkaline conditions, the adsorption is notably enhanced, and is the most non-ideal at the PH 7.00. Thus, when using the adsorbent to defluorinate, the space area, adsorption time, treatment scale, regeneration method and frequency should be combined to consider the minimum dosage of the activated alumina. 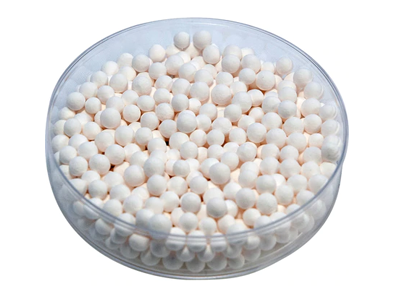